India is a land of hundreds of different textiles both printed and woven. Each region in India has its won typical fabric which is closely associated to its history. Indian textiles riches have continued to mesmerize world since long. Few of the most popular textiles are favorite with everyone irrespective of region, gender and age. If we talk about Gujarat, it is famous for silk and brocade weaving. Even during the Mughal rule, Gujarat was known for producing velvets, silk and weaving brocades. There is a place called Aashval which is famous for its rich colors in contrast to the simple brocade border. Common themes used are, trees, doves, flowers, parrots, lions with colored silk interspersed with jari.

One talks about Indian textile and does not mention brocades of Varanasi, is almost out of question. One of the most well known symbols of wonderful Indian textiles, brocade or also known as kinkhwab (fabric of dreams) is the weaving of pure silk and gold strands to create a lush fabric. Varanasi designers are famous for incorporating various designs in single design. Several new designs can be seen incorporated in Varanasi textiles. These designs range from creepers, birds, floral patterns, animals, to hunting scene patterns and human forms. Not for noting, Varanasi is known as home of silk and brocade weaving. There are several other regions in India which are famous for independent brocade. The names which come to mind are; Aashavali, Tanchori, Jamewar, Paithani, Kanjeevaram, and Balucheri.

Posted by india fashion at 9:42 AM

Mention the color black and one starts getting the images of class, elegance, sophistication, mystery and a great deal of enchanting appeal. Wearing a black dress totally separates you from the crowd. The beauty of this color lies in its ability to go with any almost anything.

Black, undoubtedly is one of the safest and easiest colors to wear. This applies for both men and women. One needs to care about few things whole wearing black. One must wear matching accessories. If the entire outfit is black, opting for deep black makes sense because dark shades of this color provide that extra richness and zing to your personality. If the outfit is black which is already a sensuous color, having tassels, plunging necklines and bell sleeves can make it even more attractive to the naked eyes.

Beauty of an all black outfit is truly accentuated with usage of luxurious fabrics like satin, velvet and leather. It enhances the glamour factor. Women with fair complexion need to use light make ups whereas darker complexions should maintain a light tan.

Women also need to use right mix of accessories to stand out in the crowd because in a party most of the women wear black outfit. So having a posh hand bag or swarovski bracelets or attractive jewellery is all it will take to make you the center of attraction. Jewellery made of gold or silver or even turquoise go beautifully with black outfit. Think of having a pair of strappy pink heels with crystal accents and find yourself surrounded by several admirers.

Posted by india fashion at 9:39 AM

Draping saree is being done in different fashion in different regions. This is often inspired by culture of that particular place as well as religious preference and lifestyle. If we look at urban females, we will find attractive array of saree in forms like graceful silk, frequent usage of brocades, stiff tangils and chiffons. These saree are maneuvered around in desired way so that effect is long lasting as well as comfortable for the wearer. The way saree is worn in cities, it forms a skirt with pleats and tied around the waist. Generally, the part or also called pallav or pallu is draped over the left shoulder. Pallu is often left flowing or pinned up for the desired effect.

If we look at Bengal, we will find refined saree being used in sophisticated fashion. It looks quite elegant, seeing Bengali women draping saree in their traditional fashion. Sans any pleats, saree are wrapped around the waist and tucked neatly. The best time to see collection of Bengali saree and its aura is festival time. The diversity of India truly reflects in saree and draping. Walk around southern India and one can find different style of draping. Here, pleats are at the back instead of typical front portion. Whereas in Tamilnadu, extra long saree is worn by both Iyers and Iyengers females in a complicated fashion. The length is nine yards instead of traditional six yards.

Maharashtrian saree are also of same length and worn in similar fashion to that of Tamilnadu, whereas Santhal tribals of Bihar use saree which are up to the knee length. No wonder, this wonder garment has kept mesmerizing women of all age groups and even survived the onslaught of western garments.
Posted by india fashion at 7:10 AM 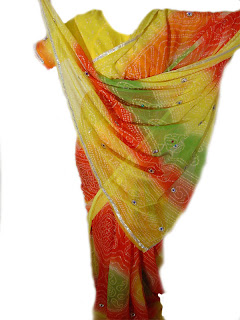 Sari is a typical Indian dress. Six yards of cloth, that’s all. Sari is worn by Indian women across all the states of India with much aplomb. Considered as one of the most elegant dresses ever worn by a woman, saree symbolizes feminism and sophistication. Saree can be stylist as well as seductive. It adds an element of poise and glamour to the wearer. The striking aspect of saree is, despite India treading firmly on the path of modernization, saree has remained an essential dress in millions of Indian households. It has managed to ward off all the new dresses, western clothes and different cultures. If truth be told, saree symbolizes India ness. In the life of Indian women, saree holds an important place. Whether its marriage, festivals, child birth, death and many more things, saree conveys it all. Different colors of saree tell different stories. Red is what one associates with bride and marriage. Silky gold color is worn in times of festivals like Diwali and Dasahra. White saree denotes parting of a loved one.

Every region of India presents a different facet of saree. Also, weavers and dryers of a particular region express the story of saree in a different way through their designs. Like, south Indian saares are represented by silk in appealing colors. Few of them even weigh 10 kgs. Patola weave and bandini style is associated with western region whereas kantha stitched silk saree is a hallmark of Bengal. Few of these Bengali saree take as much as six months of preparation. No wonder, they look so exquisite and fascinating. Banarasi saree are famous for their brocades whereas paithani silk saree is a gift from Maharashtra.
Posted by india fashion at 11:59 AM

Khadi’s journey into the world of fashion began with khadi show which was presented in Mumbai by the Khadi and Village Industries Commission (KVIC). It was organized in 1989 and the real highlight was showcase of 85 dazzling garments, created by Devika Bhojwani. It was an interesting mix of eastern and western attire. Famous designer Ritu Kumar presented her first Khadi collection at the Crafts Museum in 1990. It was also an informative show because of her unique Tree of Life show. It was actually an audio visual tableau which displayed historical journey of textiles in India, the creators of textiles and design lexicon of the country. She also presented talents of those who have been instrumental in regenerating textile crafts and the potential users of the garments.

Her show was a big hit and in fact so big that it has been presented several times. This show was also presented in London in1997 where khadi managed to fascinate British as well. Today, khadi’s popularity is such that it’s a must part of every fashion conscious person’s wardrobe. With changing times people have started to adopt retro fashion and in that case khadi leads the pack.

Kamal Wadkar is another renowned promoter of khadi clothes. She is involved with traditional crafts. According to him, khadi is also the ideal fabric considering Indian climate because of its cool texture and loose weaving. He is credited to present almost 4500 garments in 150 styles in different colors weaves and embellishment with prices ranging from Rs.460-750. She had also aptly titled her exhibition ‘Elegance in Khadi’.
Posted by india fashion at 12:58 PM